Phantoms of Nabua in 2009 Future Projections

Presented as part of the 2009 Future Projections program:
Phantoms of Nabua was filmed in Nabua, northeastern Thailand.
It will be presented at MOCCA, according to Slate.

Jeremy Heilman of MovieMartyr has posted a review of Phantoms of Nabua, and had this to say:

"Just under eleven minutes long, but likely to tower artistically over most of this year’s full-length features..." 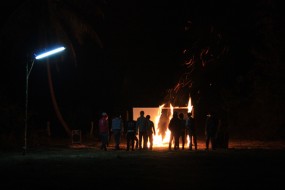 Apichatpong Weerasethakul’s A Letter to Uncle Boonmee (another segment) is also being presented as part of Wavelengths 4: Une Catastrophe.

Permanent Link to this Article
posted by TOfilmfest at 2:58 PM