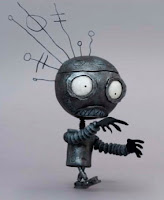 In celebration of Family Day, the Tim Burton exhibition at the new Lightbox centre will be FREE on both Sunday, February 20 and Monday, February 21 from 12pm to 6pm.
(Regular price, $22.75)

The Lightbox centre opens at 10am.

There are also free film screenings on both days!

Free Mary Pickford screeningsThe Mary Pickford: The Invention of the Movie Star, on the 4th-floor in the Canadian Film Gallery runs free from January 13 to July 3, 2011.

PS.
For families with children, Lightbox is also bringing back Bibi Blocksberg (2002, Germany; previously screened for Halloween), and Singin' in the Dark hosted by Shawn Hitchins (presented during the 2010 Nuit Blanche celebration).

Permanent Link to this Article
posted by Greg at TOfilmfest at 3:45 PM