Our research for the Toronto International Film Festival started early this year! — we headed to the Maryland Film Festival in Baltimore to look for possible titles for TIFF'13, and to catch up on a few TIFF'12 films we missed!  ;-)

And, since the Inside Out Toronto LGBT Film Festival is happening now (right downstairs from Festival Tower at the TIFF Lightbox building), a couple more films to mention...

As we said in TOfilmfest does MDfilmfest, pt.1 — we had a terrific time at the Maryland Film Festival — in addition to thanking our host Eric Cotten (film-producer; recently assisted in curating the inaugural Annapolis Film Festival), we would like to give a shout out to some of the film-makers we met, and had a chance to talk to, in Baltimore...

...and some of our favourite-places, during the festival...

...and – being from Ontario / living under liquor laws written in the 1920's – we have to mention a couple observations about Maryland's alcohol laws:  you can buy 'carry out' alcohol from a bar(!) — and you can drink while shopping at a liquor store(!) ...in fact, at Lighthouse Liquors they have $2 draft-beer to enjoy, while you browse the isles...  :-)  — God Bless America!  ;-)

See you in September!
@TOfilmfest

PS.
shout-out to @CamilleInBmore (MDFF filmmakers' lounge) too – hope to see you and Eric in Toronto, this September!  :-)

Permanent Link to this Article
posted by Greg at TOfilmfest at 5:35 PM 0 Comments

There are a lot of film festivals around the world.  It seems Toronto hosts more film festivals than any other city in the world — many of them screening right downstairs from Festival Tower at the TIFF Lightbox building.  And each year we receive invitations from festivals both near and far – we would love to support them all – but TIFF has always been our main focus.

But TIFF is a "no-time-to-eat-or-breathe" festival.  After spending countless hours each summer collecting press releases, researching film titles, and updating the TOfilmfest website — when it's all over, we usually escape the city for a more relaxed experience.  For the past few years, we've found ourselves at the Ottawa International Animation Festival.  Although it's the largest animation festival in North America — same-day tickets can be bought at each theatre, line-ups are short, and crowds much smaller.  It reminds us of the way TIFF used to be, in the early 90's — when it was called the 'Festival of Festivals'.

We have often considered adding a spring-time film festival to our calendar.  Hot Docs, North America’s largest documentary festival takes place here in Toronto every spring — but that wouldn't seem like a vacation; we need to escape the city!

So earlier this month, we headed down to the Maryland Film Festival.  Baltimore is within a day's drive of Toronto, or a short flight from Pearson to Baltimore/Washington (via Air Canada), or Billy Bishop to Dulles, Virginia (via Porter Airlines).

The Maryland Film Festival opened on a Wednesday, with a program of short films in the beautiful 525-seat Brown Center at the Maryland Institute College of Art.  There were 127 films screened over 5 days – including 31 foreign films from 18 countries – and it all wrapped up on a Sunday, with a closing night film at the oldest movie theatre in Baltimore: The Charles.

The MDfilmfest began in 1999, so it's 15th edition puts it about where TIFF was in 1991 (when I attended TIFF for the first time, as a Ryerson film-school undergrad).  Tickets rarely sell-out, line-ups are brief, and pass-holders walk right in (without having to obtain individual tickets).  All that changed for TIFF, as it grew into the largest public film festival in the world — which makes the MDfilmfest such a gem:  large enough to attract great films and interesting talent, and still small enough to find yourself grabbing a bite with Bobcat Goldthwait, or a cocktail across the street with John Waters.  (In fact, all screenings at the Maryland Film Festival are attended by either the film-makers or the stars of the film – and most of those attending the festival stay for the closing night party.)

As the growth of TIFF is often attributed to its director Piers Handling, credit should be given to Jed Dietz, who as the director of the Maryland Film Festival, has steered the festival to another record year for attendance (ticket sales jumped almost 50% in 2013).  The MDfilmfest's motto is "film for everyone", and director of programming Eric Hatch has ensured that their line-up is a good mix of local stories, indie flicks, and art-house draws. 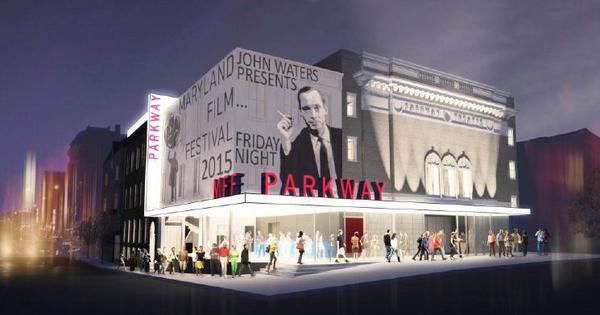 To accommodate future growth, the festival is looking to redevelop the Parkway Theatre, at the corner of Charles St and North Avenue.  Originally build in 1915 as a single theatre of 1,100 seats, the Maryland Film Festival has partnered with Johns Hopkins University and the Maryland Institute College of Art for a $17M redevelopment.  The plan calls for a 420-seat theater for film and music events, plus two 90-100 seat theaters to be carved out of the pair of adjacent buildings, along with offices, academic spaces, and a ground-floor restaurant.

We had a terrific time at the Maryland Film Festival!  —  THANKS TO:  Eric Cotten (Operations & Development at MDFF + MINDSEYECINEMA productions) who we met at TIFF'09, encouraged us to visit, and was our host & guide in Baltimore ... Jed Dietz (MDFF director) who offered us a tour of the Parkway Theatre ... the ubiquitous Troy Warner (MDFF box-office manager) ...  Eric Hatch for programming great films ... Kevin & Bill at Station North Arts cafe/gallery ... and all the staff at the Hotel Monaco Baltimore ... :-)

Permanent Link to this Article
posted by Greg at TOfilmfest at 11:30 AM 0 Comments