The 2014 Toronto International Film Festival begins next week.
In the previous couple of posts we've covered: 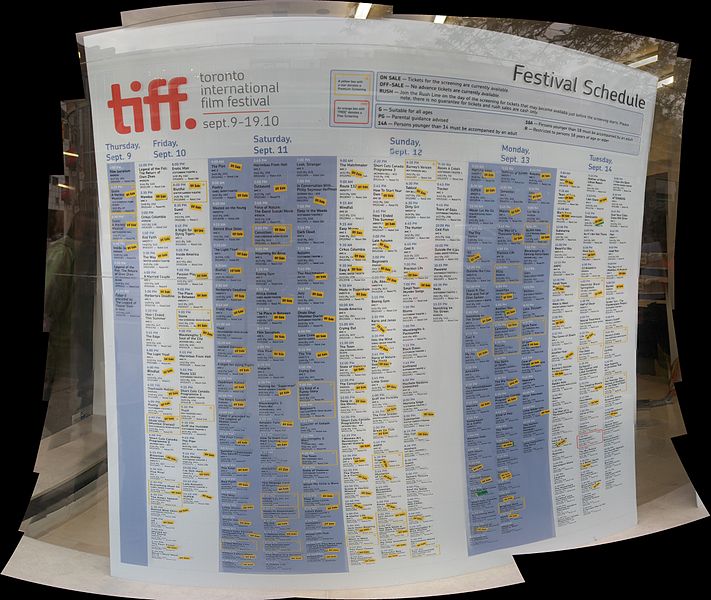 Here's how to get tickets:

Permanent Link to this Article
posted by Greg at TOfilmfest at 5:00 PM 0 Comments

Once again, we're very happy to be invited by Peter Howell, movie critic for the Toronto Star, to be a part of his annual Chasing the Buzz poll — a panel of critics/programmers/film-buffs name the film they are most looking forward to at the festival.

This will be our 7th year, and we are being asked to provide just one film title, and just one sentence to state the reason for our choice. As part of the process, we came up with a list of 20 films that we're most looking forward to at TIFF'14 – here they are, in no particular order:

The top picks from all panelists will be published in the Saturday Star on August 30th, and also appear online at TheStar.com.

Permanent Link to this Article
posted by Greg at TOfilmfest at 8:45 PM 0 Comments

Last year we did the Maryland Film Festival, and recently one of our friends (film-producer and festival-programmer), who's heading up from Baltimore for TIFF'14, asked:
It's a great question, because the Toronto International Film Fest is a "no-time-to-eat-or-breathe" festival. It's just not possible to see more than a fraction of the 400+ films screening over 11 days — and it's especially challenging, from a scheduling perspective, because there are often 20+ films screening at the same time!

So, for what it's worth, these are some of the things we consider when selecting our screenings:

Also, you may be interested to browse films by program:

Btw, if you want to filter, sort, and search all the feature-films from your smart-phone, try TIFFwidget — it's a mobile-browser friendly version of our full TOfilmfest.ca website. Also, there's a PDF of the 2014 official film schedule, in case you can't pick one up.

Permanent Link to this Article
posted by Greg at TOfilmfest at 5:30 PM 0 Comments

The final film titles have been announced for the 2014 Toronto International Film Festival:


There were also additions to some previously announced programs:

Including short-films and free screenings, the festival is bringing over 400 films to Toronto this September!

See you at the fest,
www.TOfilmfest.ca

Permanent Link to this Article
posted by Greg at TOfilmfest at 5:00 PM 0 Comments